The Sick and Ugly Face of our Modern Health Service 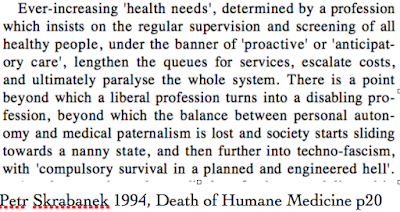 The Sick and Ugly Face of Modern Medicine was predicted by Petr Skrabanek over 20 years ago (24) but events have gone way beyond this prediction too - Skrabanek's 'paralysed system' is all too clear. The NHS is seriously struggling to cope. We are now in the absurd position of using vast amounts of scarce resources in 'treating' the healthy while denying treatment to those who really need it; the injured, the ill, and the vulnerable who do not comply with the current public health dogma!

Oh, there are certainly vast amounts of money to be made with this system - when the healthy are called in to discover they may not be as healthy as they thought (as measured by the current medical prevention yardstick). The myriad of pills and potions available to reduce cholesterol(1), lower blood pressure, body weight (BMI) and quit smoking etc. etc. are more profitable than a gold mine - but most of that money goes to the big pharmaceuticals. Some refer to this system as the 'sickness industry', and while it is relevant on another level to this invidious development of causing harm to another by omission - that's another story.

NHS England rightly intervened to prevent the first attempt to callously ration healthcare and impair the health of 'the unworthy' as defined by NHS Vale of York CCB (2) - according to current lifestyle dogma.


A proposed restriction by the NHS Vale of York Clinical Commissioning Group would have seen non-life threatening procedures delayed by a year for those with a body mass index exceeding 30. The rule would also apply to smokers.

While the York Commissioning Group agreed to rethink the move, only a month later, a few miles down the road and despite the earlier debacle, the public outcry and censure by NHS bosses, another one raises its ugly head; NHS Harrogate and Rural District CCG. (3)  (Does this come under the 'common purpose' club mantra of 'leading beyond authority'?); "SMOKERS and obese patients will be banned from surgery for six months to cut costs."

Harrogate and Rural District CCG chief officer, Amanda Bloor, who appears to be the lead proponent of this institutionalized discrimination and bigotry, published this CCG report as late as 4th February 2016  (4).

The public sector equality duty created by the Equality Act 2010 requires the CCG to pay due regard to the need to:

• Eliminate unlawful discrimination, harassment and victimisation and other conduct    prohibited by the Act.

• Advance equality of opportunity between people who share a protected characteristic and those who do not.

'Protected characteristics' are those few specified minorities who are protected from discrimination by law (eg race, religion, sex, age, etc.). Many other minorities are not so protected eg smokers or the obese. The Equality act 2010 (5) is supposed to protect everyone from discrimination, as defined above. Bloor has chosen to ignore this but when we look deeper at the 2010 Act and see that the original premise is later qualified (contradicted?), we can understand why;

2. How you can be discriminated against;


eg. "harassment - unwanted behaviour linked to a protected characteristic that violates someone’s dignity or creates an offensive environment for them" ...

"It can be lawful to have specific rules or arrangements in place, as long as they can be justified."


Read another way; Harassment is legally mandated for anyone who is not 'protected' - Everyone other than 'the protected' can legally have their dignity etc. violated with impunity. The law gives permission for the bigot and bully to ill treat others IF they can 'justify' such ill treatment!

Do not forget that everything Hitler did to the Jews in the 1930's was LEGAL. (Justified in the mind of a abnormal brain based on a debase ideology)

Bloor and her entourage may be legally correct but they have dismissed out of hand the moral case for equality. Do they not realise they are being exploited by anti-smoker nutters? Physically or mentally harming anyone even by omission can NEVER be justified.

How stupid can this get? One disaster compounded by another and another... becoming ever more desperate, because no one, with the power to do so, is willing to admit that the whole anti-smoker/healthism kit and caboodle is wrong and has been/is an unmitigated failure. People are dying in the face of this failure for goodness sake! Does anyone really believe that failing to treat minor problems that could easily turn into major problems will save money?

It is frightening that some in the medical profession are going along with it, pandering to the demands of a few brainwashed anti-smoker nutters. The pedigree of these nutters can be traced back to those crazed individuals and organisations that preached hell and damnation, wanted to burn witches at the stake, lock up all sexually active females with chastity belts (and hold the keys to them). The same nutters railed against sinful fornication, and claimed overwhelming proof that masturbation made you go blind, caused cancer etc. The same nutters who were behind alcohol prohibition a hundred years ago and are trying the same today along with demonising salt, sugar, red meat etc. Who in their right mind (ie. those not indoctrinated by this hate-fest) thinks that humiliating those who are obese or even a bit overweight will have any positive outcomes? They have enough to deal with without suffering the wailing of self-satisfied, puritanical, nutters. Stress and chronic depression are killers too!

These hubristic nutters have always been amongst us and it seems incredible that they are given so much freedom today despite this well established history lesson. Why would some medical professionals put their competence and trust under serious scrutiny for these nutters? Do they really think that if they just keep their heads down it will all go away? It beggars belief.

This is not about health nor is it about 'helping' smokers or other targeted groups. It is about the  puritanical mindset of a few noisy, callous individuals and the power of pharmaceutical industry, it is about a failing health service, social control (coercion), money and greed.

The dogmatic demand that smokers quit for six months before surgery is patently absurd given that there is much evidence that doing so will IMPAIR their treatment and recovery. Look at a few of many research facts that are relevant to the denial of medical treatment for smokers, and quitting smoking problems, information that they don't want publicly exposed;

The majority of lung cancer cases are now in NON smokers (includes never smokers but mainly affects former smokers, after a mean 18 years of forgoing the health benefits of tobacco smoke):

Quitters usually gain weight - sometimes substantially, hence one of the main reasons we have an 'obesity problem' in the first place:

Smokers may have a small increased risk of developing type 2 diabetes but that risk increases to 91% for quitters, (6) only returning to normal after 12 years. (Yeh HC et al 2010; John Hopkins Uni. Baltimore):

Most people are aware that non smokers are more likely to suffer from Parkinson's disease and other CNS problems such as Alzheimer's (Birtwistle et al 1996) (11) but it has many efficacious benefits for a wide range of mental health issues such as ADHD, Tourettes, and schizophrenia (Grinshpoon et al 2004) (12). About 90% of schizophrenics are heavy smokers BUT they are LESS likely to develop cancer than the general public, including lung cancer!

Research shows that smoking can tone-down excessive auto-immune responses and is anti-inflammatory eg. (Zuckerbraun et al 2007) (15) (This research is related to carbon monoxide, a key component of tobacco smoke).
Those who quit smoking had a 6-fold increase risk for autoimmune thyroid problems. (21) (Carlé et al 2012)  There seems to be a complex interaction between smoking and the immune system in that the authors of the paper were speculating that “transition from current to ex-smoker may lead to limitation in activity, to chronic health conditions, to physical and psychological symptoms and to a higher hospital admissions“. Smoking is associated with a low prevalence of thyroid auto-antibodies, and autoimmune thyroid problems is a huge problem in the world today.

Tempering the body's autoimmune and inflammatory responses may also be the reason why lungs donated by a smoker are MORE successful, than those from a non smoker, in lung transplant operations (17). 47% of all lung transplants were from smokers (bear in mind only 20-30% of UK population are smokers). While long term survival rates were about the same, non-smokers performed relatively poorly in the short term with 77.7 per cent of transplant patients surviving one year compared to 90.8 per cent with smokers' lungs. There was no significant difference in the overall effectiveness of the lungs, time spent in intensive care and in hospital, in addition, smokers' lungs do not show a higher incidence of lung cancer (Harefield Hospital 2014)

The same applies to Ischemic stroke where smokers more likely to survive, again with better outcomes. (19)

A recent study went further and actually showed that smokers were SIGNIFICANTLY LESS likely to die during a hospital stay for general trauma and LESS likely to develop a major complication than nonsmokers. (Bell et al 2014 Indiana) (20)

Many quitters report respiratory problems, increase in chest infections, anxiety/depression, brain fogging - to name but a few, (read some personal experiences here) (14).  These forums also demonstrate how anti-smoker brainwashing, deception and propaganda has captured many into holding the vain belief/hope that all the present debilitating depression, low level suffering and ill health would be worth it and provide some form of immunity for future ill health. They have been wrongly led believe that, say, lung cancer or COPD are only smoker illnesses.

Conversely, smokers typically report that their habit improves their moods, calms and relaxes the troubled brain, increases pleasure, reduces anger and alleviates stress. Unsurprisingly, research has suggested that cigarette smoking may have effects on the human brain similar to those of antidepressant drugs (22). Stress is arguably one of, if not the biggest causes of illness. No wonder that the market in synthetic antidepressants (another boon for big pharma), is booming as smokers are coerced into shunning the natural stress reliever - tobacco.

It doesn't take a brain surgeon or a rocket scientist to understand that denying medical treatment to specific minorities is not just grossly callous and inhumane, but will also cost the NHS far far more in the long run - in more ways than one! Minor (relatively cheap) surgery not carried out could develop into Major (expensive) surgery. But the victims will probably be unable to work for extended periods while drawing unemployment or sickness benefits or their productive output would be curtailed. The costs are not just financial and economic but would extend to society and wider family who for instance, may be forced to be long term carers that in turn will curtail their economic and social activities.

While not yet officially endorsed as such, these actions to impair the health of others (and other discriminatory practices of anti-smoker nutters and their drones) ARE hate crimes.(23) It is worth remembering that those who are protected from hate crime by law today, were subjected to such hate crime for many years before those laws were enacted!

The RCS / NHS England need to stop waffling! Those responsible for this and their supporters should be rooted-out and if not prosecuted as criminals, at least sacked ASAP and barred from ever setting foot in any 'caring' medical facility thereafter - except to be allowed treatment for their own cancers etc. that they are at increasing risk of developing as they grow older!  Everyone should have access to medical treatment, including the neurotic righteous!

"There is something terribly wrong with this country, isn't there?" A Must watch, to understand why.

Politicians encourage organised crime! To Incite or Aid and abet criminals IS a crime!