Callous exploitation of the Child, the Baby, the Foetus
and the objective Scientific method 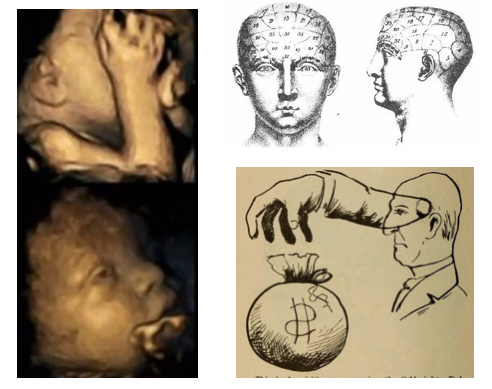 Recently, the media has been swamped with stories about a 'study' that utilised 4d ultrasound pictures of babies in the womb (eg. here and here) and how certain fetal movements were claimed as proof of smoking harm. It doesn't take much to realise that this is speculative rubbish, on a par with 'I can tell when anti-smokers tell lies - their lips move', (Hold on; maybe that's not such a good analogy), yet still it made national news!

I commented on both of these articles but, as is increasing the case, one failed to appear and the other was hidden away in the middle of a long list of existing comments, a tactic that ensures very few get to read it. Clearly my comments do not accord with the anti-smoker 'message' and, god forbid that an uncommitted reader might happen to see something other than anti-smoker propaganda that may cause them to think! Here is that comment;

So, foetuses whose mothers smoke are more active in the womb, and this is supposed to be evidence of the negative effects of smoking in pregnancy?

'News' by press release is one of the most effective methods of propaganda dissemination; call it 'science',  use babies or children, add a few astro-turfers / sock-puppets to reinforce the 'message' and Big anti-smoker industry has a very effective recipe that has been used for years. However, anti-smoker propaganda is now having to run at manic levels that strongly suggests it isn't working anymore and people are waking up to their tactics. This 'news story' looks like a good example, reported in several web newspaper sites, with plenty of anti-smoker astro-turfer hate comments.

In actual fact, there is some good scientific evidence that smoking is highly beneficial to cognitive functioning in adults. Smoking/nicotine improves brain function in several areas of memory, speed, duration etc. typically by between 10% and 30%; (Yes, it can tune up the adult brain and improve it by nearly a third more; 'Science is conclusive: Tobacco increases work capacity'. )

Logically, the foetus could well benefit from this too via the mother's smoking - it may actually be advancing/improving brain function development - hence more foetal brain activity? We already know that smoking does have several general benefits as well as those relating to pregnant women and children, but exploitation of the natural parent/child protective instinct is one of the most successful anti-smoker propaganda techniques ever, so these benefits are routinely ignored/suppressed (if you don't know of any - consider the difference between education and indoctrination). Making any wild assumptions either way, based on such tenuous evidence, as in this article, is merely evidence of pre-conceived bias (forgive the pun).

Here is a realistic view of smoking while pregnant; 'The myth of smoking during pregnancy being harmful'
http://www.sott.net/article/268159-The-myth-of-smoking-during-pregnancy-being-harmful


"Smoking women tend to light up when under stress. This is less harmful to the baby than over-eating. For this reason smoking mothers tended to have better outcomes for baby and mother."

The anti-smoker demonising agenda, intended to create irrational fear in pregnant smokers themselves and even more irrational hatred from those anti and non smokers too stupid to realise they are being manipulated by vested interests, must stop before it incites even more really serious adverse consequences.

I could have included other information, such as on the NHS choices website. Covering this story, it begins with a more realistic view of this 'study' before defaulting to anti smoker diatribe and fallacious propaganda slogans;


"Unborn baby shown grimacing in womb as mother smokes," is the somewhat misleading headline in The Daily Telegraph."

"The implication is that this is a sign of slower development as a direct result of maternal smoking. But this has not been proven."

"This study had a very small sample size, including just 4 smokers [and 16 non smokers]. And we don't know whether these observed differences in movement actually have any meaning in terms of the ongoing development of the unborn baby, or during infancy or childhood."


Then the rot sets in;

"Still, we don't need any new research to tell us that smoking in pregnancy is harmful."


i.e. the Royal 'us - everyone knows' meme and fallacy, with the inferred - 'and anyone else is stupid'. (followed by the usual anti smoker propaganda slogans - almost all of which have been exposed as purely biased speculation based on the dearth of real knowledge/evidence and is dependent upon ignorance)

"A case could be made that using the images to frighten mothers into quitting would be justifiable for the greater good, but it also wouldn't be entirely truthful or transparent. "


Of course this is the ultimate purpose of this poor quality 'study'; It has nothing to do with the health of children, babies or foetuses, it is about (innocently or intended) reinforcing old anti-smoker propaganda, promoting social engineering and frightening the unsuspecting into compliance. It is the politically motivated 'greater good' as defined by anti-smoker/healthist nutters. Their ultimate goal is prohibition of tobacco / criminalisation of smokers. (and increasingly any other substance or behaviour proscribed by those few fanatics, with a newly exhumed medieval puritan mind-set, who have managed somehow to gain the power and wealth to impose their flawed values on others). Propaganda by news release is, we know, still very effective even when inaccurate. That propaganda is internalised by the target victims, reinforced and given respectability by previously learned propaganda, and they fail to notice the fact that it is utter rubbish even when/if it is later exposed as disingenuous.


Much of the anti-smoker campaign copies the principles, methods, psychological manipulation and emotional blackmail utilised by Hitler in his campaign to 'rule the world'. His perverted views, though not necessarily incorrect ones, outlined in his book 'Mein Kampf' may explain to a certain extent the underlying motivations and techniques employed by the anti-smoker industry today.

"It is always more difficult to fight against faith than against knowledge."

“As long as the government is PERCEIVED as working for the benefit of the children, the people will happily endure almost any curtailment of liberty and almost any deprivation.”


Hitler also pointed out a little know truism that if you are going to lie - lie BIG, and keep on repeating the lie - eventually it will be believed. He explains;

"In the big lie there is always a certain force of credibility; because the broad masses of a nation are always more easily corrupted in the deeper strata of their emotional nature than consciously or voluntarily; and thus in the primitive simplicity of their minds they more readily fall victims to the big lie than the small lie, since they themselves often tell small lies in little matters but would be ashamed to resort to large-scale falsehoods. It would never come into their heads to fabricate colossal untruths, and they would not believe that others could have the impudence to distort the truth so infamously. Even though the facts which prove this to be so may be brought clearly to their minds, they will still doubt and waver and will continue to think that there may be some other explanation."


Hitler was actually referring to the Jewish race in this quote, but he went on to infamously exploit this flaw in the human psyche himself. Yet he surely must have known that ultimately 'the big lie' would inevitably fail, just as the insincere anti-smoker agenda must fail - the only question is how much damage these nutters are allowed to cause in the mean time. He continues;

"The grossly impudent lie always leaves traces behind it, even after it has been nailed down, a fact which is known to all expert liars in this world and to all who conspire together in the art of lying." (Adolf Hitler, Mein Kampf, vol. I, ch. X)

"There is something terribly wrong with this country, isn't there?" A Must watch, to understand why.

Politicians encourage organised crime! To Incite or Aid and abet criminals IS a crime!